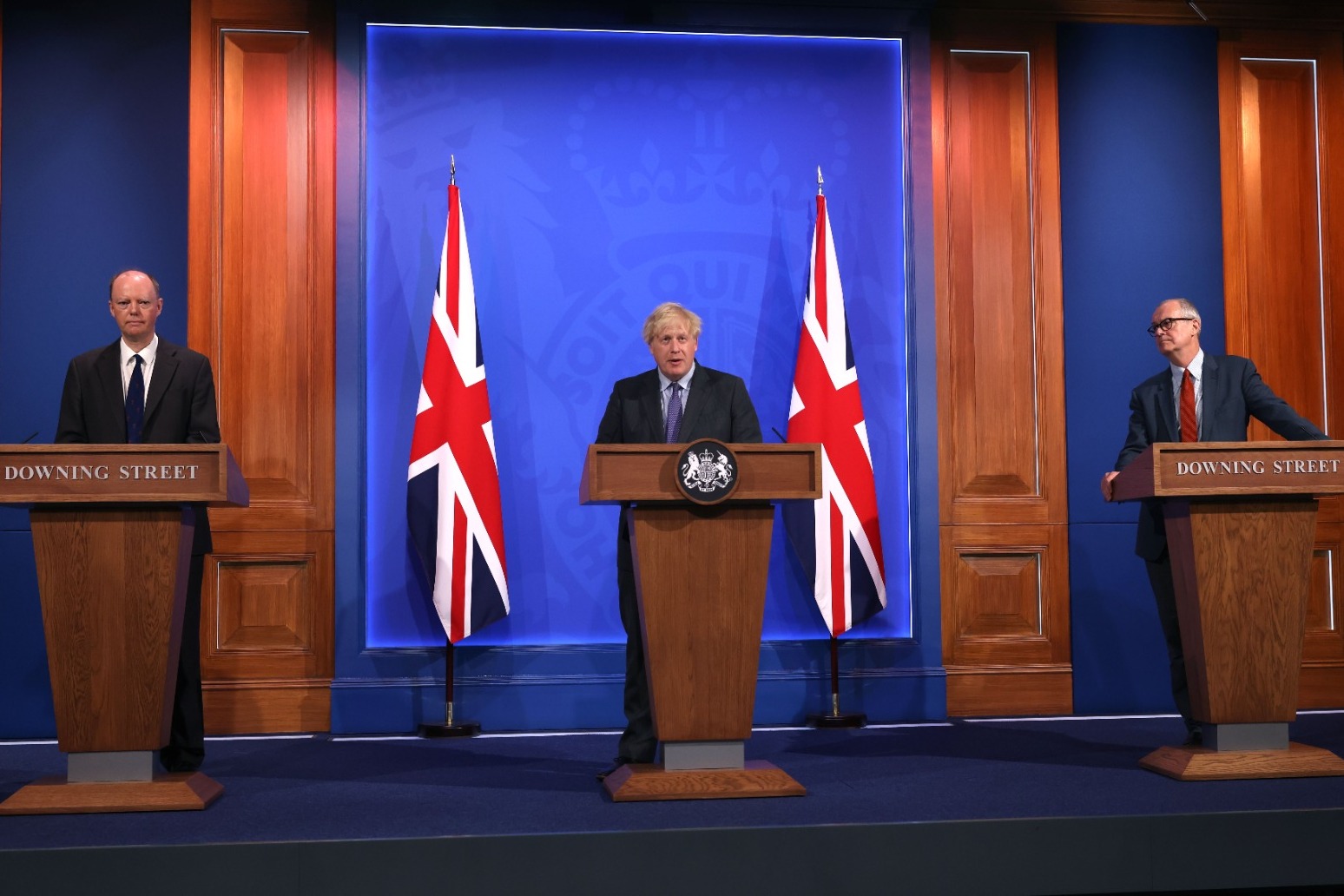 Boris Johnson set a new “terminus date” of July 19 for the end of England’s coronavirus restrictions after being warned that easing restrictions as planned could lead to thousands of deaths.

The Prime Minister ordered a delay of up to a month to the final phase of his road map to end the lockdown due to concerns over the rapidly spreading Delta variant first identified in India.

The news was described as a “devastating blow” for the night-time industry, while hospitality businesses will also see trading impacted by continued social distancing.

Experts feared going ahead with Step 4 on June 21 as anticipated could lead to hospital admissions on the scale of the first wave of Covid-19, heaping unsustainable pressure on the health service.

To avert this, Mr Johnson said during a Downing Street press conference that it is “sensible to wait just a little longer” as he put back the end of all legal limits on social contact by a month.

The Prime Minister said he is “confident” no further delay will be necessary but was unable to rule that out, warning of the possibility that an unforeseen and “far more dangerous” variant could emerge.

He hopes deaths will be significantly reduced by July 19 because it is expected two-thirds of adults will have been offered both vaccine doses by then due to the delay being coupled with a reduction in the time between jabs for the over-40s.

For now, limits on numbers for sports events, theatres and cinemas will remain in place, nightclubs will stay shuttered and people will be asked to continue working from home where possible.

Labour accused the Government of “incompetence and indecision” and blamed the delay on border security.

Shadow health secretary Jonathan Ashworth said: “The only reason this delay is being introduced is because the Conservatives failed to secure the country’s borders and a new variant from overseas was allowed to take hold, and failed to put in measures like proper sick pay support and surge vaccinations when needed.”

Sir Howard Panter and Dame Rosemary Squire of Trafalgar Entertainment said the announcement was a “catastrophe” for the theatre, music and live entertainment sector, adding: “This delay is yet another bungle from a government that wouldn’t be given a single star in a review of its performance. The confusion and muddled messages are reminiscent of a West End farce.”

Mr Johnson did, however, announce a limited easing of restrictions to take place from June 21 as he faces the prospect of a rebellion from Conservative MPs who are furious about the delay.

The 30-person cap for wedding ceremonies and receptions, as well as wakes, will be lifted – with limits to be set by venues based on social distancing requirements.

The Wimbledon finals will be contested in front of capacity crowds and Wembley will be allowed to host 40,000 fans for its final four Euro 2020 fixtures as the pilots on attendance of large events continue.

Care home residents will be permitted to stay overnight with friends and family from Monday without needing to quarantine for 14 days on return to their residences.

The target of offering all adults at least one jab was also brought forward to July 19, while over 23s will be invited to book their jabs from Tuesday.

Addressing the nation, Mr Johnson said: “It’s unmistakably clear that vaccines are working and the sheer scale of the vaccine rollout has made our position incomparably better than in previous waves.

“But now is the time to ease off the accelerator because by being cautious now we have the chance in the next four weeks to save many thousands of lives by vaccinating millions more people.”

England’s chief medical officer Professor Chris Whitty said the health service could “run into trouble” if the number of people being admitted to hospital with Covid continues on an “exponential path”.

But he said a four-week delay “will reduce significantly the risk of a very high peak which could cause significant problems in terms of pressure on the NHS” as well as knock-on effects.

In Scotland, First Minister Nicola Sturgeon is due to announce on Tuesday whether the latest easing of restrictions to the lowest level will go ahead on June 28.

The Scottish Government had indicated it hoped to move all areas to the lowest level of restrictions – level zero – from this date.

But a rise in case rates and hospital numbers, driven by the spread of the Delta variant of coronavirus that originated in India, may mean this is delayed.

Modelling by the Government’s Spi-M group suggested there was a possibility of hospital admissions reaching the heights of the first peak in March 2020 if the relaxation in England went ahead on Monday.

Experts believe the Delta variant is driving a rapid accelerations in cases, estimating it is between 40% and 80% more transmissible than the Alpha variant first found in Kent.

Ministers were expected to hold a vote over the extension in Parliament after a debate on Wednesday, with lockdown-sceptic MPs on the Tory backbenches considering a rebellion.

But the regulations will almost certainly be approved by the Commons after Mr Ashworth said the party would support extending the restrictions.

The Prime Minister came under fire from Commons Speaker Sir Lindsay Hoyle and senior Tory MPs over the decision to release details of the changes via a press conference at 6pm on Monday rather than to Parliament.

The Prime Minister is expected to announce a four-week delay to the planned date of 21st June Boris Johnson is facing a furious backlash from Tory MPs as he prepares to put the final lifting of coronavirus lockdown restrictions in England on hold. The Prime Minister is expected to announce the ending of social-distancing rules – which had been slated for June 21 – will be delayed for four weeks […]